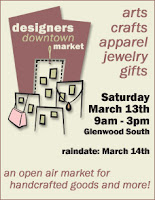 My first show of 2010 is tomorrow at Ornamentea in downtown Raleigh. Mention you saw this ad and get 10% off purchases. To see who will be there, check out the website at www.designersdowntownmarket.com
Posted by gildedlilyglass at 9:27 AM No comments:

I know I promised to blog more faithfully, but I have been recovering from our Belize adventure a couple of weeks ago. My husband Russell and I had such an amazing time that I thought I would give you an abbreviated travelogue.

We have been interested in Maya culture for the past 15 years so we bypassed the obvious attraction of the Belizean beaches and headed straight to the town of San Ignacio close to the Guatemala border in the Cayo district. The town is in the valley of the Macal River and is bordered by the Maya Mountains.

Here is a view of the valley town from our balcony. 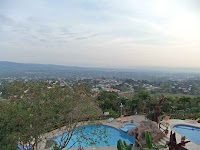 The hotel is on the highest hill in the town right next to an early Maya citadel. After walking up the gravel road from the town just ONE time in 104 degree heat, I understood why it was such a defensible place for a settlement. Here is one of the many small temples in the lush site called Cahal Pech. 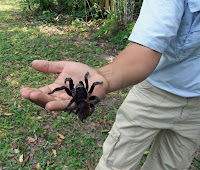 We have made several unsucessful attempts to visit Tikal in Guatemala. My primary purpose for this trip was to get there through the back door, so to speak. The only delay we encountered this time was a teacher's strike that blocked up the border for a couple of day 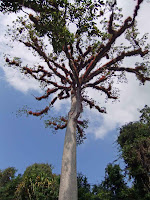 s. It was a very pleasant group of strikers.

Tikal is amazing. The site is protected jungle and has an abundance of wildlife. Here is one of the furry friends we made. I was especially taken with the huge Ceiba tree, which is the national tree of Guatemala and has a significant role in Maya cosmology. The ancient Maya of Central America believed that a great Ceiba tree stood at the center of the earth, connecting the terrestrial world to the spirit-world above.

But we came to Tikal to see the magnificent ruins. Visitors are allowed to climb to the top of a number of pyramids via wooden stairways of varying steepness. 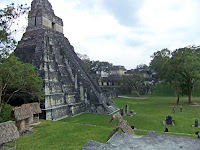 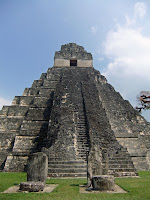 The climb was worth the effort due to the views, 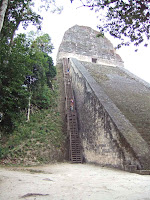 but my ankles were swollen for a week after a few days of this. 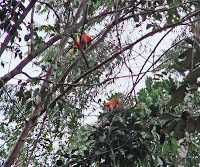 ying traditional Maya herbal medicine. This site is only around 50 miles from San Ignacio, but the trip there took three hours due to the terrible condition of the road AND the van. Our guide provided a lot of interesting information about current Maya beliefs and was excellent at spotting wildlife. Here are two of a group of five scarlet macaws we saw.

The remoteness of the site of Caracol makes it intriguing and very un-touristy. This was the beginning of the dry season and the archeological team from the University of Central Florida had just set up camp for the excavation season. Here are a few shots of Caracol, including Russell inspecting bromeliads growing on the roots of the ubiquitous Ceiba trees. 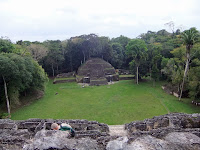 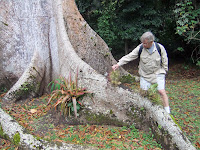 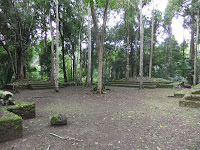 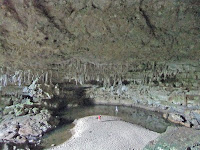 On the way back to town we stopped at the Rio Frio Cave and Rio On Falls. Here is a picture of some visitors enjoying the cave. When we were leaving Rio On, our transmission blew out and Russell was certain we would be stranded in the jungle with only two hours before dark. Then out of the blue Super Allison, a fearless pet-sitter from the DC area, drove up and agreed to carry us back to town. Allison, if you are out there, please email me!

The next day we took a local bus to a nearby site called Xunantunich, and it was our favorite place of all. The site is small and must be approached by a hand-cranked ferry, but it is very park-like and full of butterflies . We were also excited because we finally spotted a howler monkey. When Russell was reviewing the pictures, he noticed that the little guy had a friend located to the far right of the frame. 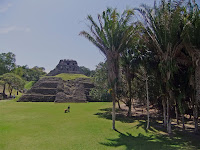 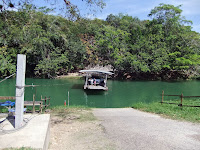 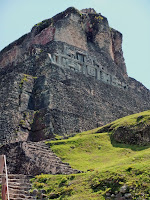 The flight back home the next day was annoying but eventful. (Our plane had been struck by lightning on the way down.) We were glad to be home with our animals, but we left a little of our hearts with the friendly people we encountered in San Ignacio.
Posted by gildedlilyglass at 7:32 AM No comments: