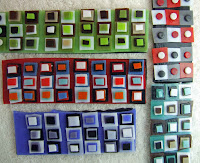 I thought I would show you what my sandblasted glass looks like at the beginning of the process when I stack pieces of glass 3-4 layers deep. The first shot is of the larger pendants. The second photo is bars of earrings and small pendants. 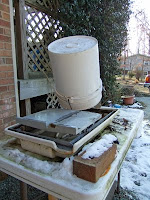 After the glue is set, I fire them and then they are ready to slice with the tile saw.

I was finally able to dig the tile saw out of the snow and cut the new glass this week. I took this picture after I had used it. Still a lot of snow left.

After the bars are cut into pieces, they undergo grinding, two more firings, and sandblasting.
Posted by gildedlilyglass at 4:56 AM 1 comment:

When it rains, it pours

This year I should say "when it snows, it pours". The weekly snows and bitter cold (for North Carolina) have inhibited my glass production. Most of my glass work is done outside or in unheated spaces so it has been difficult to experiment as much as I like to do this time of year before the show season starts.

At first I was able to work a little on glass beads which are made on a torch in my garage until the oxygen concentrator I use for fuel quit. This production interruption gave me a little time to take and edit pictures hence the multiple posts.

So here we go with pics of the snow. 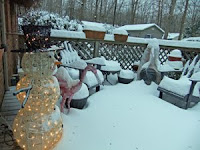 This is the same location I showed in my first blog- only four months later. I decided not to put away the Christmas snowman until the snows stop, but the flamingo is getting a little cold.

The first snow was so much fun because I didn't have to go to work. It was like being a kid again. I made beads while my dear husband trudged to the store to get supplies for making his famous brunswick stew. It was the best weekend I have had in years! 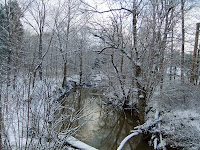 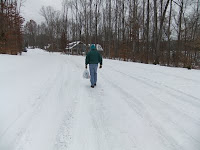 When the roads improved a little, we were able to drive around near the house and take in the snowy wonderland.

Posted by gildedlilyglass at 6:57 AM No comments: 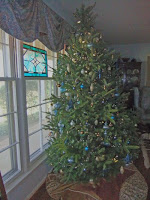 I fully intended to start a weekly blog back in November, but it was my first holiday season with Etsy and I did not know what I was getting into. With the activity there and at my holiday craft shows, I hardly had time to make glass much less work on the computer.

To catch up, I will start with Christmas. I really love holidays because I love to decorate. I believe life is a stage and demands a backdrop. I was disappointed that I had no company this year because my tree was the prettiest ever. Therefore I will share a few shots with you.

Each year I alter my color scheme. This year I added a deeper teal to my collection of ivory, gold, and pale aqua ornaments. 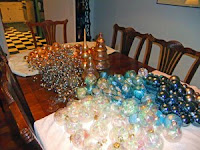 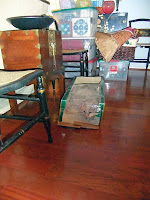 .
I thought they were even so beautiful when I dismantled the tree that I would have left them on the table were it not for my little "helper" Tobey.

It was his first Christmas, and although he had fun playing soccer with a few Christmas balls I was very relieved that he never tried to climb the tree.
Posted by gildedlilyglass at 6:33 AM No comments: